﻿﻿Morning, everyone! Today I am pleased to introduce you to, April Gardner.

April resides in Georgia with her USAF husband and two sweet kiddos. In her free time, she enjoys reading, gardening, and DIY. In no particular order, she dreams of owning a horse, visiting all the national parks, and speaking Italian.
Librarian, reviewer, and avid reader, April adores anything books. She writes a regular column for the joint blog, Reflections in Hindsight, and is the founder and senior editor of the website, Clash of the Titles. She is the author of the best-selling novel, Wounded Spirits.

I met April through a mutual friend, Michelle Massaro, and through COTT (Clash of the Titles). If you haven’t checked it out, you should. It’s a literary website where authors compete and readers judge! Tons of fun!

Everyone, meet April. April, meet everyone! Tell us about your first novel?

My first published novel is Wounded Spirits, which is set in 1813 during the Creek Indian War in what is now Alabama.

I had the pleasure of reading Wounded Spirits when I won a drawing on a blog! I loved the book, felt like I was right there with them as they experienced war…and love! Sigh. 🙂 How did you come up with the idea for this book?

I grew up hearing that my many times great-grandfather was Chief Red Eagle/William Weatherford. Turns out, he’s probably not, but I still cherish as my own the stories of his bravery in the face of Jackson’s overpowering army. It was the story of his extraordinary leap from the bluff that made me wish to read the account in novel-form.

I’d never written more than a high school paper, but I figured that if this particular story was ever going to be written, why not do it myself? Eight years later, I held the book in my hands.

I loved that this book was set to real events. Which character was the toughest to write?

Zachariah was probably the toughest. I have nothing in common with him, and he’s been through some pretty horrific stuff. Stuff I could only take a stab at imagining. How a person might respond emotionally, physically, and spiritually wasn’t the easiest to create. I pray I did it justice!

You did! My heart broke with him and cheered with him. Even though you haven’t been through some of the things Zachariah went through, would you say a little piece of yourself is in one or all the characters or not?

I actually try to steer clear of putting myself into my characters. It probably comes down to the fact that I’m a very private person, and even if no one ever knew that that particular part of my heroine was a look into myself, it still makes me uncomfortable. Yeah, I’m weird.

That makes sense. Now when we read we’ll always get the mystery of wondering if a little piece is you or not. At least the stalker in me will! What do you find most rewarding about writing and most challenging?

Most rewarding? Creating worlds and people to fill them. Most challenging? Returning to my own! I love every bit of my real life, but there’s something addicting about stepping into my pretend world. Once there, I get sucked in. Kinda like Facebook. Lol!

As they say in MS, “You ain’t just whistlin Dixie!” Or at least I think they say that here, I’ve never actually heard anyone but myself. I think all writers would have to agree. Stepping into storyworld is like crack.  Don’t even get me started on fb!

Tell us 3 random fun facts about yourself!

ROFL!! We’re going to have to Skype so I can experience the choking. 🙂 I couldn’t solve a Rubik’s cube if a gun was pointed to my head.

If you could live off one food for the rest of your life, what would you choose?

Rice. Love all forms of rice. Maybe because I was born in Asia?

That’s the only reason I would think , lol!

What have you learned about the craft that you would like to pass on to other writers?

I’ve learned that there is never an end to learning! Just when you think you’re arriving, bam! You realize how much further you have to go. Recently, I discovered author K.M. Weiland’s website. She’s a talented author who has boat loads of great tips for writers.

Thanks for sharing the tips and the website! Great advice. April, it’s been so much fun and I know everyone has had a blast getting to know you. What are some other ways they can connect with you?

I love to hear from my readers! You can reach me on Facebook, at my site  or at Clash of the Titles

Awesome! Just my own little plug here, Clash of the Titles has unpubbed weeks and it’s great exposure! I won my round and semi-finaled in the final clash. It was through semi-finals that I met my dear friend, and clash buddy, Jodie Bailey! 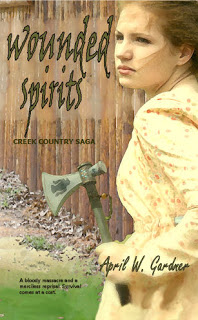 Here’s a sneak peek of Wounded Spirits and April has a question for you!

“On the frontier, Adela McGirth’s life is simple, rugged, and exactly to her liking. Her greatest concern is whether to marry the settlement’s most eligible young officer. When a distant war among the Natives spills over into a nearby skirmish, life takes a perilous turn. Deep in enemy territory Adela must choose between the man she loves and a baby that has yet to be born.
A peace-loving yet loyal Creek warrior, Totka is forced to align with the extremist Red Stick faction whose purpose is to eradicate the Whites from Creek soil. In the midst of battle, Totka is assigned to protect those he is expected to hate–and kill. Life was simpler before his enemy became a beautiful face with a quiet strength and dignity he cannot resist.
Having lived a life plagued with death and loss, Zachariah McGirth is a man on a mission – he’ll have his revenge or die trying. Blinded by grief, he can’t see his way clear of yet another tragedy. Why has God taken everything from him…or has He?”

How old were you when you discovered the love of reading, and which novel was it that first impacted you?

21 thoughts on “Must Meet AND Read Monday: April W. Gardner”