Last
Tuesday,  I received a payment–a rather
large chunk–for my critiquing services. My husband came home, handed me an
envelope. I glanced at it. Another monthly packet from Voice of the Martyrs. I’d love to tell you I open it every month
and pray diligently for those who are being persecuted for the cause of Christ,
but I’d be lying. I might breathe a small prayer as I toss it out.
But this
night, I laid it on my desk and climbed up on my bed to chat with my husband
after he came home from Karate.
“Hand
me that envelope, Jess.”
“Voice
of the Martyrs? What do you want with that?” I grabbed it and held it up.
“Oh,”
he said. “I thought it was Project Rescue. What’s Voice of the
Martyrs?”
I told
him. He pulled up Project Rescue’s site. “I know you support them and on
the way home God made it clear that the amount of money you received isn’t
ours. So I thought of PR. Giving it to them.”

Of
course I was thrilled. Any chance to sow into Project Rescue (I have a page
devoted to this amazing ministry) makes me happy. But something stuck in my gut
and I focused on the packet from VOM (Voice of the Martyrs). I opened it up and
skimmed the booklet.
“Hey
Tim, this says we can donate Bibles.” A knot in my stomach formed as I
prayed in my head. Lord, where should this
money go? I was just thinking how we take Bibles for granted. We give them away
at GoodWills and there are people who weep over wanting just one. Yet we ignore
the treasures for extra sleep or hobbies…But I also love Project Rescue–girls
forced into sexual slavery.
“I
don’t really know about this ministry,” Tim said. I understand. These days
giving your debit card number over a website can be scary. And will those
people actually receive Bibles?
I wanted
to follow my husband’s lead. I’ve always prayed and asked God to increase us so
we can sow into the kingdom. One day I’d love to see a place on my novels that
says, “A portion of proceeds go to Project Rescue.” 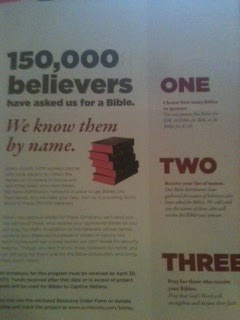 We
decided to give part to Voice of the Martyrs and sponsor 10 bibles and give the
other portion to Project Rescue.
On
Wednesday morning, after I dropped my daughter off at school and got my little
sickie settled on the couch, I prayed about those Bibles. And I prayed about my
neck problems, asking once again for healing and then believing that if God
didn’t heal me, His grace would be sufficient.
My phone
dinged. Email. Naturally, I told God to hold up. I mean don’t we all do that?
Oh, it’s just me. I checked my email and it was two devotionals that I’d signed
up for at Bible Gateway. Now, I’d like to tell you I read them faithfully, but
I can’t. In fact, I normally delete them without even reading them. Why did I
even sign up? I deleted the first one, but…
I felt a
need to open the second one. I can’t explain it. Just a feeling I should. *Disclaimer: Just because your phone dings during prayer doesn’t mean you should
always check it. 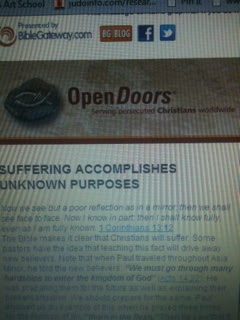 SUFFERING ACCOMPLISHES UNKNOWN PURPOSES
This was
the title. And it was the devotional about persecuted Christians. Christians
like the ones I’d just sent Bibles to–or at least I hoped that was what my
money was actually going to.
As I
read, I thought God was speaking to me about my neck. It talked about Paul’s
thorn in his flesh that God didn’t heal him of, but His grace was sufficient.
And then
I read a story about a boy, named Abdul, who drowned and died for an hour.
(Normally, I think…oh here we go when I read death stories.) But I kept
reading. The angels that carried him, told him he still had work to do and when
he opened his eyes, alive, a pastor sat praying over him.
It went on to say, “This happened twenty years ago and
ever since, Abdul’s life has been changed. Even though Abdul only completed
fifth grade in school, he is currently the pastor of a small church in a very
poor village on the island of Mindanao in the Philippine Islands. In his own
words Abdul says, “I don’t understand God’s purposes in my suffering, but I now
know the Lord.””
Something struck me!
Mindanao. I know that place. How do I know that place? I’ve never read anything
about the Philippine Islands. I poked my lips out and scrunched my brows.
Yes
you do. You skimmed it last night. 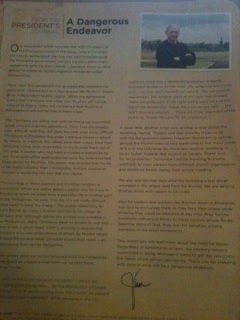 I snatched up the
Voice of the Martyrs booklet/newsletter and opened to the editor’s page.
First paragraph:
“Our newsletter editor recently met with Christians on the Philippine
island of Mindanao, where Christians are heavily persecuted. Her trip was well
timed because the Philippine government had just signed a preliminary agreement
with the Moro Islamic Liberation Front (a rebel group) to create an Islamic
region in Mindanao called Bangsamore.” It went on to tell of horrible
persecutions to the Christians. Bombs. Fear. Theft. Vandalism. Beatings.
I had just read
about this place in my devotional I never read! But there’s more!
“When our
editor asked a pastor
why he stays in Mindanao when he could have a peaceful life in another part of
the Philippines, he said, “For me it’s not really difficult. We need to feed the sheep.”
He asked only for more Bibles, as many Christians families in his village do
not have one.”
Do I believe that
the boy who drowned is this man, “Arnel” (name changed due to
anonymity and security issues) is Abdul.
I do.
Do I believe that
when we listen, God speaks–even if it’s a whisper or thought?
I do.
Do I believe that
God is sovereign and is constantly working to spread a message of hope to those
who are dying in sin and begging for just a taste of His word?
I do.
Do I believe that
when we seek God’s will, but are unsure and ask for confirmation, that He gives
it? Even through devotions and newsletters we would normally never read?
I do.
Do I believe the
money I could have kept and saved for a writer’s conference is now going to
Mindanao to spread the gospel, to feed the sheep of Jesus Christ’s pasture?
I do.
Did I mention that
on the Wednesday night after all this happened in the morning, I was teaching
on Peter’s life and discovering God’s will for your life to my new &
growing believer’s class, that we were reviewing real living and relationships
that included giving with a cheerful heart as God purposes in our hearts?
I did.
Do I believe that
this was a practical application I could share and encourage them with?
I do.
Do I believe that if
God can orchestrate something so amazing as this, then He can also orchestrate
other things in my life and make good on promises such as writing, publishing,
teaching, family concerns, physical healing (or lack of), finances…?
I do.
I do.
I do.
Do
you?
“So let each one give as he purposes in
his heart, not grudgingly or of necessity; for God loves a cheerful giver.”
2 Corinthians 9:7
If you are
interested in sowing into the Kingdom and feeding God’s sheep, please visit
Voice of the Martyrs. And as always, Project Rescue! 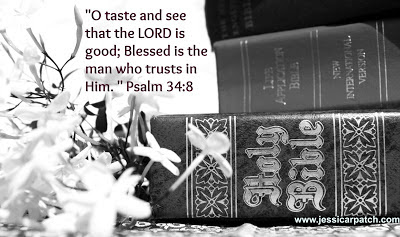 This is one of my favorite verses. I love to open up God’s word, taste the promises and see Him come through in a mighty way.

It’s true. Blessed is the man who trusts in God. Maybe not in physical ways, but spiritual. God does care more about your heart and where you spend eternity than He does your physical comforts in this temporary life.

Wednesday, I’ll be sharing a most powerful personal experience. I tasted. I saw. And boy did it impact my life. I’m forever changed–and this just happened last week. Please, please come by and experience my own personal miracle.

Musing/Meditation prompts: Think on the times you opened up and sampled His word, how new insights and wisdom as well as comfort and direction flooded your soul. Did it create a taste for the goodness of God? Count three things He’s done in the past 24 hours that were good to you? Ask the Holy Spirit to help you out if you’re stuck and can’t think of a single thing. Think about your favorite sweets. What is it about them that you love? How is God’s word and His goodness sweeter? Can you honestly say you’d rather have God’s goodness than that favorite dessert? If not, spend some time in prayer and ask God to change your heart.

This next question may sound random and not mesh with what we’re musing on, but I have a reason. It has to do with Wednesday’s post. I have more than ten Bibles in my house. It isn’t a question to make you feel guilty, it’s just to lay some ground work for Wednesday.

How many Bibles
do you have in your home?


Also, come by and see me at Hannah Conway’s blog! I’m giving a few tips on how to spring clean your manuscript!