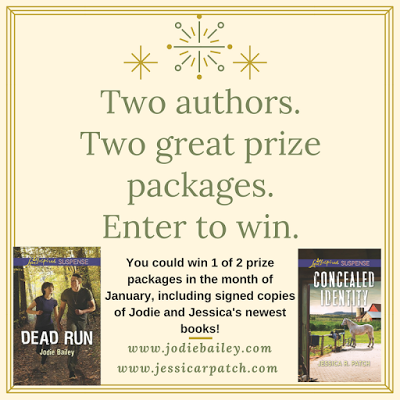 Through the month of January, my good friend, Jodie Bailey, and I have teamed up to give away TWO super cool prize packages which includes a signed copy of each of our January releases: Dead Run by Jodie and Concealed Identity by moi! (Must be 18 or older. U.S. only.)

Check out the prize packages: 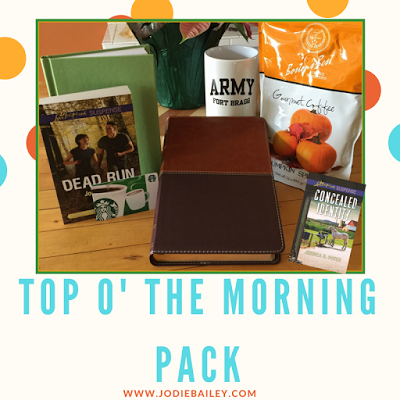 Wake up to THE good book with a journal for notes, a cup of pumpkin spice coffee in a sweet Fort Brag mug, and a two good books! And hey, don’t forget sweet treats, more coffee (or tea) from Starbucks ($10)! 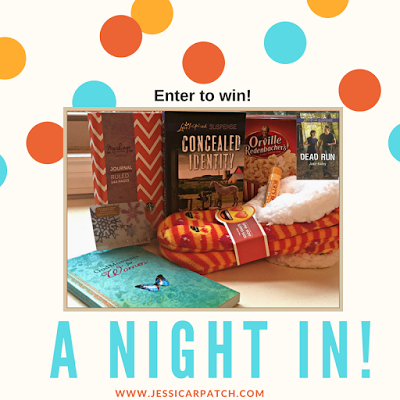 On a cold night, stop by Starbucks ($10) for your favorite hot drink (or sweet treat), come home and curl up in some warm fuzzy socks (emoji heart eyes because, hellooo, you’re reading romance!), pop some popcorn, and enjoy signed copies of Dead Run and Concealed Identity… and don’t forget before bed, a little moment with God, some Burts Bees to soften those lips (xoxoxo) and a journal to keep notes!
Ya’ll just don’t know how cool it is to have a book releasing with Jodie! We met during a pre-published excerpt competition and have been fast friends since.

Tell me, have you made a life long friend through a chance encounter? Share the deets in the comments!

Hey everyone! Guess who’s in the house today?
That’s right the amazing, fabulous, wonderful Jodie Bailey! I am so glad I know
her. And I’m so glad she writes wonderful books I can enjoy. She’s about to
play a few rounds of Would You Rather with us, along with her main characters
in her newest Love Inspired Suspense, Crossfire. Doesn’t that sound awesome?
Well it is. I’ve read it!
Thanks for being here today, Jodie!
Would You Rather…
…feel pain (emotional) or nothing at all?
Jodie: At one time, I would
have said “nothing,” but I’ve learned that nothing is far worse than something,
even when something is hard.
Andrea: Nothing. It would be
amazing to wipe away the hurt and go numb.
Josh:  Until I crossed paths with Andrea again, I’d
have told you nothing. That’s a battle I’ve fought far too long, but now… I’m
starting to think it’s worth facing the pain if it means feeling so much more.
…change something about your past or see what your future
holds?
Jodie:  Am I allowed to say neither?  My past has made me who I am today, and I’m
finally able to say that. People say all the time they want to know the future,
but I’m pretty sure they don’t. I guess if I could change one thing it would be
how I handled a particular family relationship early on so that maybe it would
be more healed today.
Andrea: I’d save my
brother.  Knowing what I know now, I’d
have paid a lot more attention back then and he’d still be alive today.
Josh: When Andrea’s brother
came knocking on my door that day, I’d have dropped everything for him.  It would have saved two lives and changed
everything about mine too. Worst decision I ever made was telling him I’d talk
to him “tomorrow.” It cost all of use everything.
…sing every word you speak or always speak in rhymes?
Jodie:  Trust me, you don’t want to hear me sing.
Andrea:  Uhm, this question has me a little bit
concerned. I have an opening two days from now and we could talk about this.
Josh:  Neither. I’d be out of the Army so fast or on
a psych profile so fast I wouldn’t know what hit me. Not to mention, my guys
would have zero respect for me. I can’t imagine how that would play out in
battle. You’ve got to be kidding me.
(Jess here! Josh, you’re so breaking the rules.
And for a military man…tsk! ;))
…be able to fly or read minds?
Jodie:  Fly.
I’m pretty sure I don’t want to know what people really think all of the
time. And I could get to the beach even quicker!
Andrea:  Read minds. It would help so much in a
counseling session to know what a patient was not confronting. Wow. Do you know
how much faster my patients would be healed if we could get to the bottom of
things in session one?
Josh: Fly. No doubt. That
would be awesome.  Man, no one could ever
hit a home run over an outfielder who can fly.
…rather
run out of oxygen on Mount Everest (slowly but surely) or underwater?
Jodie:  Mt. Everest.
I’d feel totally trapped underwater.
At least on Everest it would be wide open with a great view.
Andrea:  Do you think about death a lot? I still have
that appointment open in two days. Maybe I can clear something this afternoon
for you instead.
Josh:  On Mt. Everest.  It’d be like that movie where Tommy Lee Jones
played an astronaut and ran out of oxygen on the moon.  At least he finally made it to the moon and
died with a smile on his face. But, honestly, if I knew my oxygen was running
out, I’m pretty sure I’d turn around and head down. Definitely not going to
take a seat and wait for it to happen.
Oh my goodness, that was so much fun! Loved your answers, Jodie. Thanks to you, Andrea, and Josh for playing!
Here’s a peek at Crossfire!

A DANGEROUS REUNION
After he couldn’t save her brother, army first sergeant Josh Walker isn’t about to let anything happen to Andrea Donovan. Josh may have saved her from one attack, but drug smugglers are desperate to get information about one of Andrea’s patients—a patient who’s disappeared without a trace. Despite the danger, the beautiful counselor refuses to hand over confidential files. Now Josh and Andrea have no choice but to battle on for their lives—and their love—or they’ll be the latest casualty to get caught in the crossfire.

So, answer one or all in the comments!