“If God would start playing by the rules, it would sure be easier to trust Him.”


I’ve had the opportunity to read Susan May Warren’s The Shadow of Your Smile. If you’re a Susan May Warren fan and stories from Deep Haven, you won’t be disappointed in this novel.

Plot and subplot are rich with drama, romance, and humor.

This novel is about a couple in their mid-forties, who’ve already had a tragedy strike their lives, now–Noelle Hueston is thinking about leaving her husband and starting over. One last kiddo to graduate and she’s making a new life, but an incident leaves her injured and her memory past college is gone. Funny, when she wakes up, she truly thinks she’s twenty-one! Which is sad and hilarious at the same time.

This main plot is about loving, forgiving, and starting over. A beautiful story of two married people who’ve grown apart through time and unfortunate circumstances.  I thought the ending to this plot was well done and I closed the book with satisfaction.

The subplot involved the couple’s oldest son, Kyle, and his love interest, another local from Deep Haven, but the tragedy that wrecked the Hueston family reached into Emma Nelson’s family as well.

Susan May Warren has a unique way of describing using all the senses and when I read one of her books, including this one, I feel like I’m transported to Deep Haven. I live there as long as it takes me to read the book. I had lots of time yesterday, so I read it in one long stretch.

This book is set to release in 2012. I recommend you nab it up when it does. You’ll enjoy winter in Deep Haven, the crackling fires, fresh powdered snow blanketing a story of lost love, found.

I appreciate Tyndale giving me the chance to review it in return for my honest opinion.
Here’s a sneak peek at The Shadow of Your Smile:

A beautiful blanket of snow may cover the quaint town of Deep Haven each winter, but it can’t quite hide the wreckage of Noelle and Eli Hueston’s marriage. After twenty-five years, they’re contemplating divorce . . . just as soon as their youngest son graduates from high school. But then an accident erases part of Noelle’s memory.
Though her other injuries are minor, she doesn’t remember Eli, their children, or the tragedy that has ripped their family apart. What’s more, Noelle is shocked that her life has turned out nothing like she dreamed it would. As she tries to regain her memory and slowly steps into her role as a wife and mother, Eli helps her readjust to daily life with sometimes-hilarious, sometimes-heartwarming results.
But can she fall in love again with a man she can’t remember? Will their secrets destroy them . . . or has erasing the past given them a chance for a future?

When it comes to romance, what season do you think is the most romantic? A hot steamy summer, spring with new blossoms sprouting, fall when nights are cool and the leaves are turning, or in winter when sleigh rides and hot cocoa beckon you to snuggle up with your honey?

“But perhaps that’s what love was–foolish. After all, God loved most foolishly. He came into the dark world to rescue people who might never love Him back. Maybe, in fact, the foolish heart was the perfect heart.”

Love is always a risk. Fear of rejection, failure, pain. Issy Presley has fears. One of them is leaving her home or backyard–but she wants to. She’s tried. She’s prayed. Fear keeps her locked away.

She works in the backyard, taking over her mother’s garden after she died tragically and she’s the secret host for a night time radio talk show–My Foolish Heart–where she gives advice on romance and dating. Don’t settle for a man who isn’t a perfect 10 on your list! She’s never met her perfect 10. She’s never dated at all.

Enter, Caleb Knight–an ex-college football star, and a wounded ex-soldier. He wants a normal life in the small town of Deep Haven and hopefully the high school football coaching position. He isn’t looking for love, but when he meets his next door neighbor–Issy–things change. He decides to enlist some help from a woman he hears on a late night radio show. Miss Foolish Heart. She has all kinds of advice to share with him to win his next door neighbors heart.

So what did I think?

I think I love me some Susan May Warren! The characters became my friends. Deep Haven became my home. I laughed and sighed at the romance. Pitter-patter sweet romance. The sub-plot with her friend Lucy and the ex-boyfriend coming back to town was just as good as Issy and  Caleb’s.  A great book. I appreciate Tyndale House for giving me a complimentary copy to review!

“Unknown to her tiny town of Deep Haven, Isadora Presley spends her nights as Miss Foolish Heart, the star host of a syndicated talk radio show. Millions tune in to hear her advice on dating and falling in love, unaware that she’s never really done either. Issy’s ratings soar when it seems she’s falling in love on-air with a caller. A caller she doesn’t realize lives right next door.
Caleb Knight served a tour of duty in Iraq and paid a steep price. The last thing he wants is pity, so he hides his disability and moves to Deep Haven to land his dream job as the high school football coach. When his beautiful neighbor catches his eye, in a moment of desperation he seeks advice from My Foolish Heart, the show that airs before his favorite sports broadcast.
Before he knows it, Caleb finds himself drawn to the host—and more confused than ever. Is his perfect love the woman on the radio . . . or the one next door?”

To WIN a copy of this book, please click “follow” and hang out with me every MWF, if you don’t already, and ANSWER THE FOLLOWING QUESTION:

Who would play YOU if your life was going to be made into a movie? 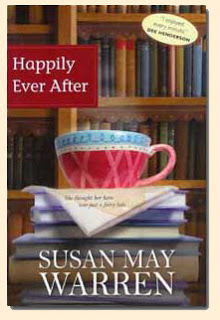 “He barely escaped with his shirt.”
I gotta tell ya, that’s not a shabby way to start out a book. I’m hooked! You judge me, but you know the minute you saw that line, you wanted to read this blog.

Happily Ever After was a free book at the kindle store, check it out it still may be. It’s not necessarily the title or the cover that grabbed my attention, although I love happy endings and books with coffee or tea. It was the word FREE that snagged me.

However, that’s not what held me. I’ve downloaded tons of free books, read a few pages and realized they just weren’t my thing.

Have you ever read that one book, you know was meant for you for that particular time in your life? That’s what Happily Ever After was for me, proving once again that fiction does minister, teach lessons, and touch lives in ways other things can’t. God knew I wasn’t going to be watching TV for two days, or venturing out to hang with friends (I’m slowly getting better. Read my blog for New Year’s Plans), but He did know I’d be reading.

This book was a touching romance with humor that I found funny. The theme of the book was about dreams. Mona Reynolds had dreams of making an old Victorian house into a bookstore and coffee shop. She’d been saving for years to make it happen, and when she finally had it in her grasp, one thing after another taunted her into believing it never would.

I had a rough week before I settled in with Susan’s book. I’d had a few doubts and unsettling moments related to my dream. I switched on my kindle, and picked up at the scene where Mona is giving up. Disappointment has overshadowed all the small successes and breakthroughs. Her quirky friend, who I could so relate to if I was having a good day, told her that God doesn’t give you a dream only to yank it away and laugh at you.

I needed to read that statement. At that moment. If you have dreams, God given ones, don’t give up, and also…read this book.

Now, I will say that her twists were predictable, but she hinted enough that she wanted the reader to guess them. And even though I knew what those were, the book held me and kept me engaged. My heart swelled when the hero swooped in at the end and saved the day. Literally I whooped and laughed out loud! I love books that make me fall in love.

It also touched on subjects of guilt, forgiveness, Down Syndrome, and faith. I had never heard of Susan May Warren before the free download, but I’ll be sure to mark her as an author to read and follow. I hope you will too! You can click on her name and read her first chapter on her website, if you don’t believe me…but…you know trust me!

“A bookstore in a Victorian house on the shores of beautiful Lake Superior. Mona Reynolds can’t think of a better storybook setting for a happy ending. Until someone starts to sabotage her plans. Could it be the drifter handyman she hired to help her? Just what will it take to make her dreams come true? “